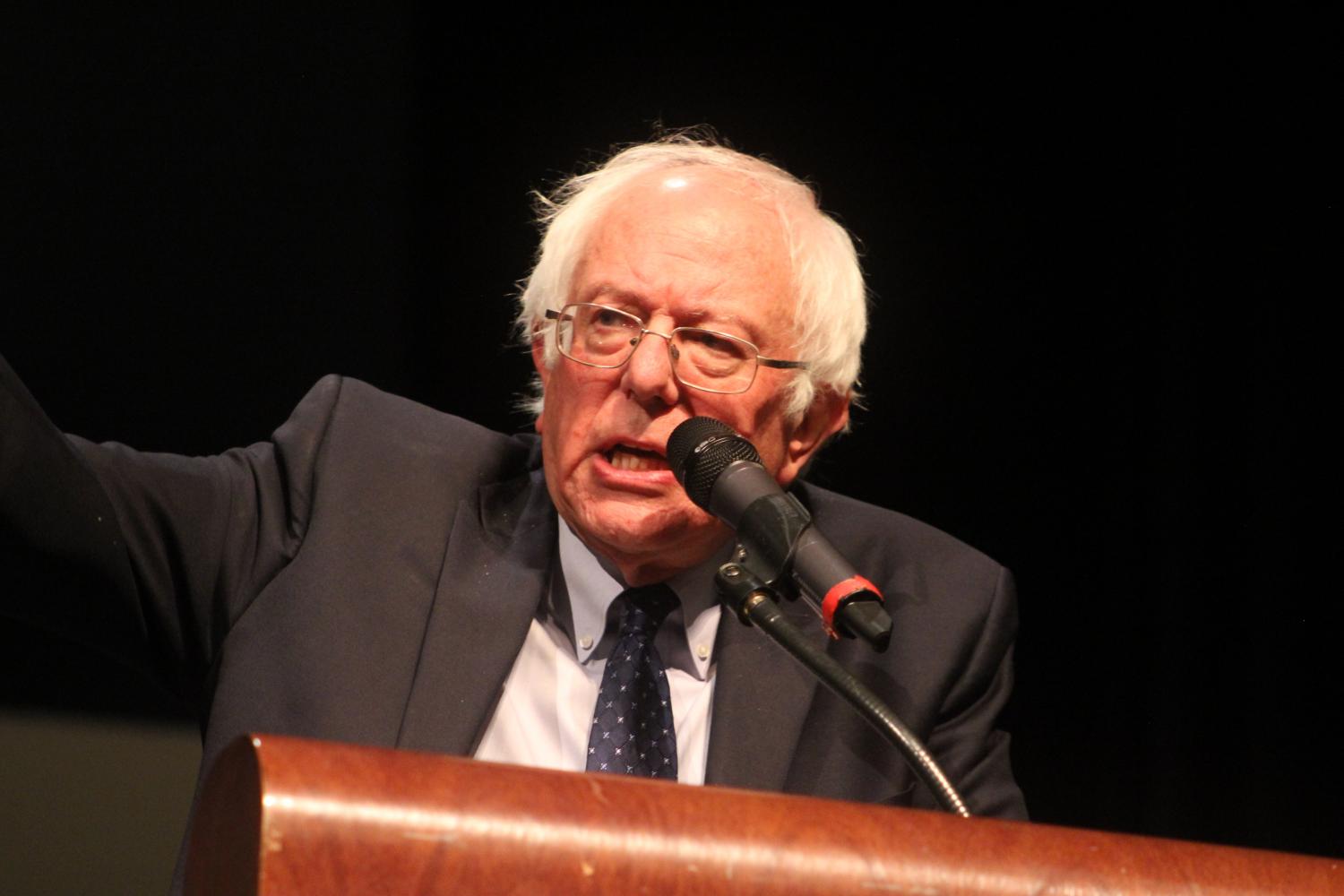 Sen. Bernie Sanders of Vermont speaks to students in the Naperville Central auditorium on Aug. 30.

Vermont senator and former presidential candidate Bernie Sanders visited Naperville Central on Wednesday to speak with students from both Central and Naperville North in support of his new book, “Bernie Sanders’ Guide to Political Revolution.”

During an assembly held in Central’s auditorium, Sanders emphasized the importance of becoming politically active, addressing a variety of topics ranging from climate change to income inequality.

“Change takes place from below,” Sanders said. “[Politics is] how you implement your feelings into public policy.”

In order to introduce these issues, Sanders asked the audience questions to get the conversation flowing, encouraging students to stand up and answer him directly. Students eagerly answered Sanders’ questions and were frequently applauded by their peers after responding.

Though the majority of the presentation featured Sanders asking questions of students, several students who had prepared questions were given the opportunity to ask them of the senator to end the event.

“I’m glad that he took the time to answer it, but he answered by explaining that the people who are kind and loving outweighed [the bad and] he didn’t say anything reassuring like ‘we are with you,’” Mahmood said. “He didn’t necessarily answer my question completely.”

Senior Cassie Heine asked Sanders if it was possible to implement socialist policies that are widely successful in Scandinavian countries in America, despite America being much more diverse.

Junior Sarah McGowan was asked to prepare a question, too, but did not get the opportunity to ask it. However, she was still interested in listening to Sanders’ speech.

“Personally I don’t agree with a lot of his beliefs, I have to say,” McGowan said. “I did want to listen [as] I wanted to hear where he is coming from, what is his perspective, [and] I wanted to be open minded about it.”

After Sanders finished speaking, Mahmood added that she expected Sanders to speak more about his book during the assembly.

“I was there under the assumption that he was there to sell his book,” she said. “And I know he mentioned his book at the start a few times but he just really talked more about his own opinions and political engagements throughout the rest of the speech.”

Jackie Thornton, the assistant principal of curriculum and instruction, felt the same, but did mention that Sanders was under no obligation to speak about his book.

“We knew that [his book’s release] was the reason for Anderson’s bringing him in,” Thornton said. “We were anticipating more of his message being centered on his book, but that’s not what it turned out to be.”

Following the assembly, Sanders conducted an interview with ABC National news, where he again stressed the importance of the younger generation becoming more politically involved.

“We’re taking on the most powerful and wealthiest special interests in the United States of America,” Sanders said. “The only way we defeat those powerful special interests is when millions of people, including young people, maybe being led by young people, begin to say, ‘You know what? We as a nation can do a heck of a lot better than what we’re currently doing on healthcare, on combating climate change, on women’s rights, etcetera.’”

Sanders’ visit was arranged by Anderson’s Bookshop in Naperville. Anderson’s also hosted Sanders at an evening presentation at the Paramount Theatre in Aurora.

Ana Turner and Riddhi Andurkar contributed to this story.