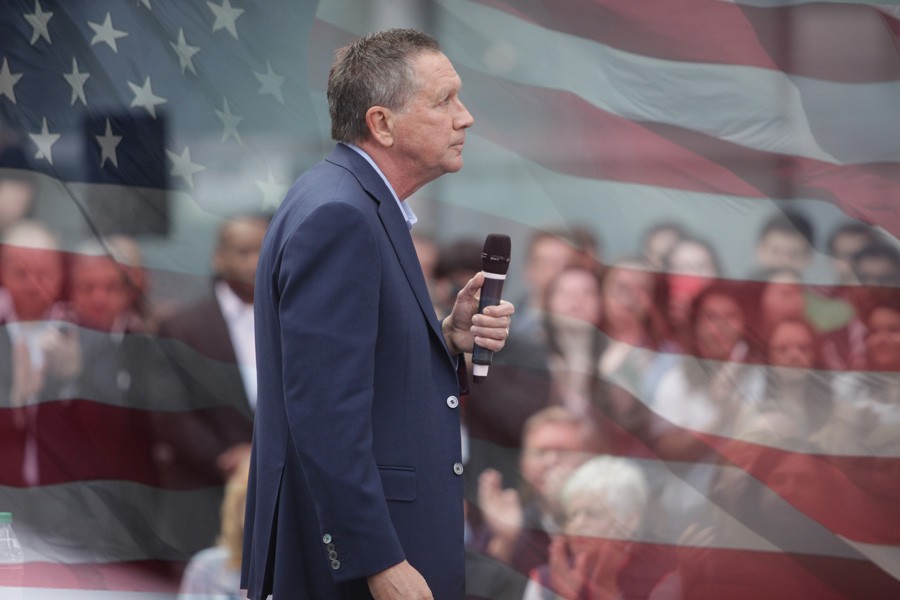 Republican presidential candidate Gov. John Kasich of Ohio spoke to a crowd of nearly 2,000 supporters this morning in the atrium of the corporate headquarters of Navistar in Lisle in an effort to secure votes for the Illinois primary on March 15.

Kasich focused on his goals to reform the job market by protecting small businesses and balancing the federal budget.  Other topics covered at the rally included Social Security, health care, national security, education, transferring power away from the federal government and working across party lines to solve problems.

Kasich opened with anecdotes about his childhood in Ohio, where he learned the importance of jobs.

“I was raised to help people,” he said after telling of his parents commitment to the small town where he grew up.

If he becomes president, Kasich said he would propose a year-long freeze of federal regulations on small businesses.

“When small businesses are hurting, we lose jobs, and jobs are so very important,” he said, which ties into his plan to help strengthen the middle class by providing more jobs for people to pull themselves out of poverty.

He also promised to work across party lines to balance the national budget.  Even as he was introduced, the crowd was reminded that in his time as governor of Ohio, Kasich turned an $8 billion deficit into a $2 billion surplus.

He briefly touched on the contentious topics of education and illegal immigration, urging that “we need to educate students for 21st century jobs” so that America has enough people to fill technology oriented jobs. In terms of immigration, Kasich said that the Mexican border should be better protected, though illegal immigrants who have otherwise abided by the law should pay a fine and be granted a path to citizenship.

“I believe our [America’s] job is to heal the world,” Kasich said on a final note, referring to his belief that America should take leadership in world affairs.

His proposals were met with numerous rounds of applause from the mostly middle-aged crowd of supporters.

“He’s the only adult running for president,” said Steve Williamson, a Kasich supporter.  “If he’s not the Republican running, I’ll vote Democrat.”

Central sophomore Samantha Cone came to the rally for a field trip for her AP Government class.

“I hadn’t heard a lot about [Kasich] before I came to the rally but I really liked what he was saying,” she said.

AP Government teacher Mike Bochenski brought his students so that they could see active politics.

“I hope that being at a political rally for the first time they know it’s not scary,” Bochenski said. “They can be politically active and see that politics is something they should be involved in.”