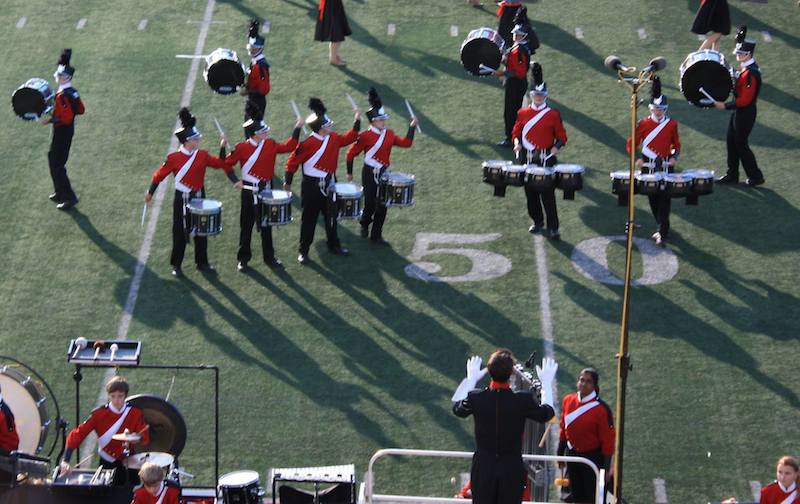 Naperville Central's drum feature from their 2014 production, "The Gift." This show was the last one with the old uniforms.

After 10 years with their old uniforms, the Naperville Central marching band finally got a chance to purchase new ones this year.

They decided to donate the old uniforms to a school in need, and in late September, 175 uniforms were donated to East High School (Rockford East) in Rockford, Ill. Rockford East, only 77 miles north of Central, had previously been wearing shorts/jeans and polo shirts, and has the same school colors as Central.

According to band director Brandon Estes, social media was used to pick a school to which to send the uniforms.

“We also asked colleagues at other band programs to spread the word,” Estes said. “In minutes, we were receiving contact from multiple people who knew of programs in need. Rockford East High School was one of the first recommended.”

Rockford East’s marching band has only around 30 members, but the uniforms will all be put to good use. As reported by the Rockford Register, the uniforms will be worn at all upcoming performances and competitions for many years to come.

“They were super nice, the band director [Sue Funk] was almost in tears while she was picking them up.” Estes said.

“There was lots of coverage,” Estes said. “It was recognized by the entire community. It really was a huge deal.”

In an article published on the Rockford Register, band director Sue Funk describes her gratitude for the uniforms.

“The uniforms will give students a sense of pride and put them in line with their competitors,” Funk said. “They have exactly what they need.”

Channel 23 News also did a segment on the donation of the uniforms from Central to Rockford East in late September.

Along with members of  Rockford East and the entire Rockford community, the donation was also recognized by students both members and non-members of the marching band.

“The school that they were donated to didn’t have uniforms, so it [will be] a good use,”  said freshman Mina Mizoguchi, a member of the marching band.

News of the uniforms also spread to students outside of the band program.

“I heard about that. It’s really cool that [the band] is helping out another school so much, and that they found such a good use for the old uniforms,” freshman Morgan Donnary said.

The Rockford East marching band has already worn the new uniforms on several occasions, including their Homecoming Parade on Sept. 25.

“[Uniforms] are such an important element to the marching band activity,” Estes said. “They make the band program feel unified. I like to think of it as having a football team without helmets- it’s not encouraged.”