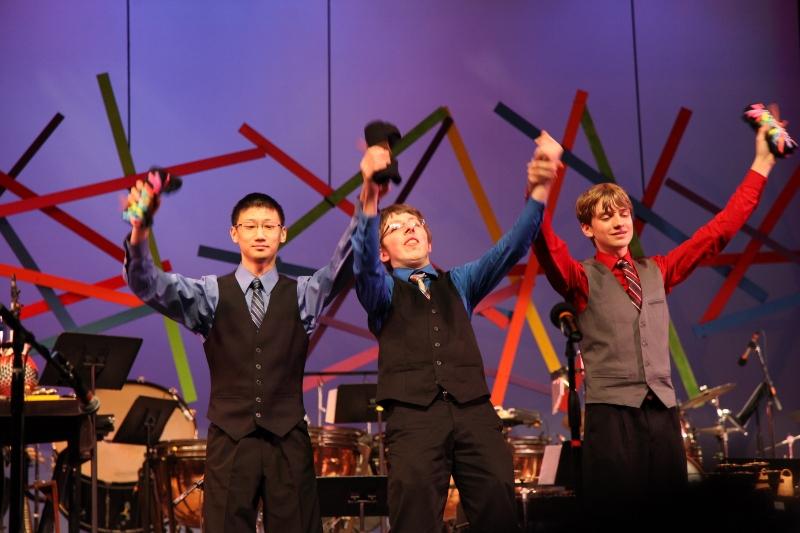 Drumshow is an annual percussion ensemble performance “in [the] style of Blue Man Group and STOMP…displaying high energy drumming and very mature musicianship,” according to its website.

“[Drumshow is] different,” senior Jimmy Sellas said. “It’s not something you see everyday. Take a percussion ensemble and amp it up and that’s what you get in Drumshow. It’s a high energy show that’s a really unique musical experience.”

This year’s production featured 19 musicians directed by Ben Wahlund and assistant directors Brandon Estes and Brad Stirtz. Tickets sold out for two of the three performances.

Cast members prepare months in advance, starting with auditions held in December and then rehearsals every day leading up to the show. It’s also important for musicians to work on the music outside of these practices.

“[The performance] depended a lot on personal preparation,” junior Sam Cohn said. “When you’re not at school it’s assumed [that] you’re practicing.”

One of the biggest challenges for sophomore Raelyn Erwin was learning several difficult pieces of music in a short amount of time. Cast members grew close to one another while preparing for the show and helped each other out with any difficulties.

“[The atmosphere] is really warming,” Erwin said. “You can go up to any Drumshow kid and ask them for help with percussion and 100 percent they will help you.”

Throughout the show, musicians play a variety of instruments ranging from xylophones to instruments from other cultures to dinnerware and bottles filled with water. In “Tappin’ Yaki”, a piece composed by Wahlund, cast members drummed on grills and tables using various cooking utensils.

“We had a skit where me and two other guys were chefs and we made these grills and tables,” Cohn said. “I got to drum with cooking utensils on a grill so that was fun.”

Unlike previous years, this year’s performance didn’t feature a guest artist. Typically, a guest artist comes to work with the Drumshow cast and performs in the show.

“This year we didn’t have anyone to work with, it was just us,” Sellas said. “It showcased the people in Drumshow rather than the guest artist.”

This year was also the first year that the show incorporated Drumline, a group of percussionists that perform with the marching band.

“During the fall I’m on the drumline so it was really cool to mesh [Drumshow and drumline] together,” Cohn said.

Now that Drumshow is over, Cohn realizes how much he treasures the experience.

“Once the last show hit it was really bittersweet to see everyone go,” Cohn said. “It’s hard because you never get to perform with the exact same group ever again so it’s really very special and memorable.”

Sellas has performed in Drumshow for the past three years and, like Cohn, thoroughly enjoys it. He encourages anyone who is considering auditioning to do so.

“Try out, go for it,” Sellas said. “[Drumshow is] a really fun time; it’s definitely worth doing. Also, go see it if you haven’t seen it. You have no idea what you’re missing.”