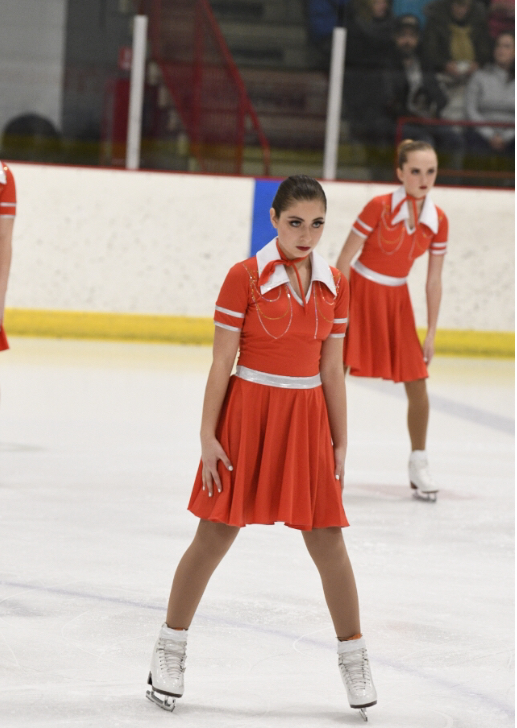 Photo by Photo by KrPhotogs

Figure skating isn’t simply a sport, but a performance art that requires an artist who can express themselves through movement in a graceful way.

For Naperville Central sophomore Karah McCarl, the ice rink is her canvas, her skates are her paintbrush and her emotions are the palette of colors that conduct her every movement.

“I love the feeling of the wind in your hair,” McCarl said. “It calms me. I can let out my emotions, anger or anything you are feeling, you can express it on ice.”

McCarl’s family noticed her love for the sport at a very young age and her fearlessness when performing on the ice.

“She’s not shy about performing at all,”  McCarl’s mother, Christy McCarl said. “She’s always told me that once she’s on the ice, skating is her only focus, and she tunes everything else out.”

Ice skating requires a lot of hard work and many practices with different coaches to work on different aspects of technique and endurance.

McCarl is part of the Downers Grove Dazzlers, which is a nationally-ranked synchro ice skating team located in Downers Grove. Even though it is a team effort, every single team member is required to pass certain levels and test moves. McCarl has to continually be working with a special trainer in private coaching sessions to be able to pass several tests that keep her in good shape and in a highly advanced level, making her a good recruit on the team.

She also has four different coaches, each with different specialties, including, two coaches for her synchro team which focus on team choreography. An ice coach works on McCarl’s detailed moves and technique, and a freestyle coach centers his training on McCarl’s  individual competitions, where she works on jumps and spins.

McCarl has early morning practices in the ice rink as well as off-ice conditioning and ballet.

“I usually wake up around 4:30 in the morning to get to the rink by 5:30, so I have time to get my skates on and stretch,” McCarl said. “So then we usually have two hours on ice and then we usually do ballet as well as part of our conditioning.”

She also has lengthy afternoon practices. Once she makes it home, she catches up with school work. McCarl somehow manages to navigate her training while also  handling several honors courses at school and maintaining a 4.0 GPA.

“You’re learning how to balance both schoolwork and training,” McCarl said. “I like the challenge, but at the same time, sometimes it does get overwhelming.”

Time is limited and keeping up with academics and at a very high performance level can be stressful and may give athletes like McCarl a lot of anxiety and stress but McCarl is able to manage every aspect of her life and still keep a good mindset.

“She goes into it with a pretty positive attitude and is usually pleased with the outcome,” Christy McCarl said.

Even though McCarl’s life revolves around her training and academics,  she makes sure that she makes time for her social life and being with her friends and family.

“ I don’t skate on Fridays, so I always have one day of the week where I can at least relax and go do some things,” McCarl said. “It’s really during the week. I’m very limited on what I can do, but during the weekend, I’m able to balance my time.”

McCarl’s ice skating journey has given her the honor to compete against highly competitive and national ice skaters in the Midwestern Area.

“Competition season is definitely a hard time for me, which starts November and goes through February,” McCarl said. “They’re always out of state; we only have one in-state competition the entire season.”

At one of these competitions, the DuPage Open, McCarl had the opportunity to meet Olympic American ice skater Brady Tanner who was ice skating at the same competition, though in a higher level than McCarl.

There have been many coaches, events, idols and even teammates that have led McCarl to want to possibly pursue ice skating in her future. McCarl’s dream would be to skate in college.

“I would love to skate for the University of Michigan’s collegiate team, but I would also love to skate for Adrian College,” McCarl said. “They have some really good junior and senior teams as well. I don’t know if I’m good enough, but they’re very, very good and very competitive. In my opinion, one of the best teams in the United States are the Haydents, they skate at Boston, and they are just incredible. It would just be a dream to skate with them. But that’s a lot of money, time and commitment.”

McCarl is unsure of her future plans or what life might have in store for her but she is excited and willing to keep working hard to find out. McCarl is a role model to many, not only for her achievements but also for her positive attitude and outlook on life.