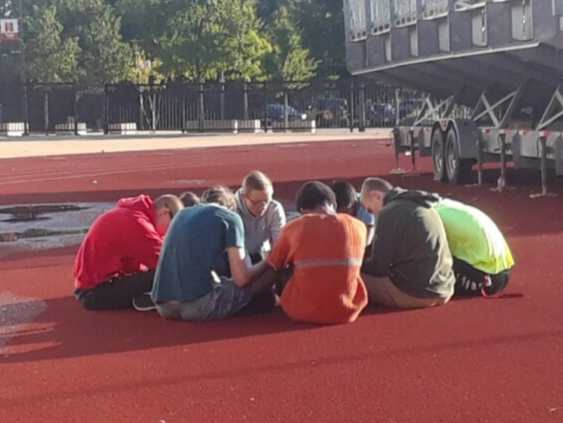 Last year’s prayer Around the Flagpole Day was hosted by the Anchored Christian Community Club, which is a religious club at Naperville Central.

One God, multiple Gods or different spiritual leaders, no matter what religion you belong to there is always a community. But should these beliefs be brought into school? The topic of religion in public schools has long been a debate with many arguments even going to the Supreme Court. Religion is a very emotional and serious topic in the sense that people are devoting their lives to one religion and can even change their values based on it.

Religious groups belong in school for a multitude of reasons. Being religious myself, I have found that belonging in a group of people who have similar beliefs brings more comfort and insight into the religion. People attending these religious meetings want to build relationships with others coming from the same place that they are in. This is extremely important in creating communities for religions that might not meet as often as other religions.

The First Amendment can give us a clear view of the placement of religion in American society. “Congress shall make no law respecting an establishment of religion, or prohibiting the free exercise thereof.” This American value placed as the first idea in the Constitution prohibits the silencing of religion and the practice of it. Public schools, being as the name suggests the tax-funded government institutions that they are, must allow students to exercise their rights as long as they do not disturb others.

As much as the Constitution gives us freedom of religion we must look further at additions to this concept. The idea of the separation of church and state originates in Thomas Jefferson’s 1803 letter to the Danbury Baptists. The letter speaks of “building a wall of separation between Church and State” and has been used in Supreme Court cases and arguments pertaining to religion and schools.Religious groups at Naperville Central High School like Muslim Student Association, Jewish Student Connections, Anchored are not school-sponsored but are allowed school space to carry out meetings. The sponsorship of clubs would be a direct violation of the ideal of separation of church and state, an ideal often confused to be in the Constitution, but as the Supreme Court has ruled, one that is regarded as law. Without the promotion of these clubs from the school directly, no laws are broken and no one is hurt.

One religion is not favored over the other and they are all given equal opportunity to promote and organize their meetings. So why not allow them?

Throughout the day the school provides space for different religions to devote time to their religion. These rooms are available during lunch and are private if needed. If this is allowed in school, then religious groups should continue to be allowed. These groups are meeting while school is not in session, which gives even more reason why they should be allowed.

The necessary exception to this idea would be if these religious groups were promoting hate or violence. This also applies to any other clubs at Central. Central does not allow clubs that support hate or violence in the school. As long as the religious club doesn’t promote hate or violence and it follows all other school regulations, it is acceptable and does belong in school.

Religious clubs belong in school not only because they provide a community outside of the place of worship, but also becase they bring a new type of community in each religion. So why not bring these beliefs into the school and show that these interactions do have an impact on students?