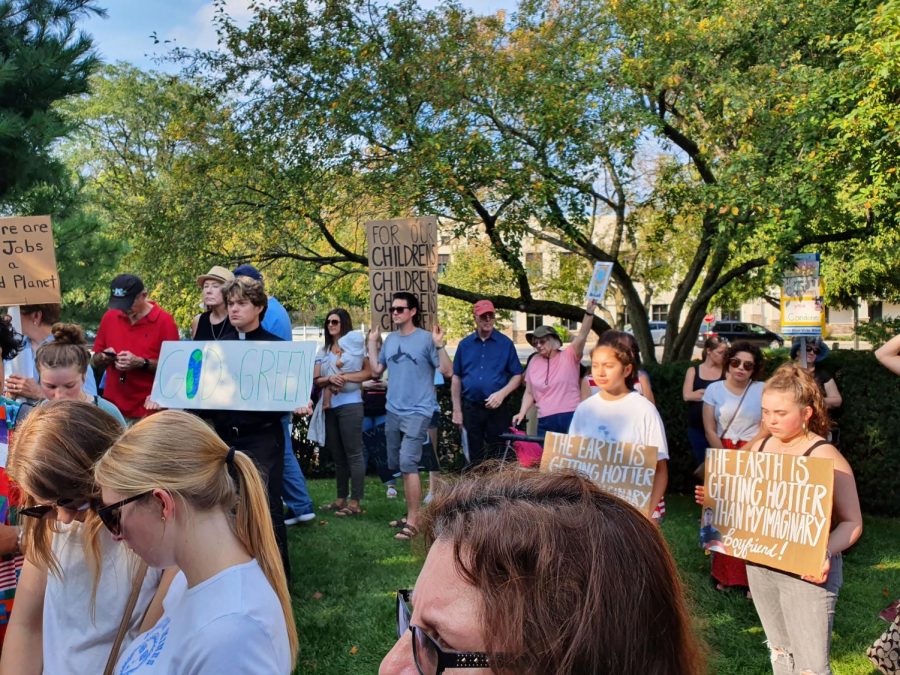 Strikers raise their signs in preparation for the speakers

Over 150 people gathered on Friday Sept. 20 at the Naperville Riverwalk to participate in the global climate strikes to call attention to climate change and political inaction.

The Global Climate Strike movement took place from Sept. 20 to 27 in the hopes of bringing real change to the topic of global warming. 22 million protests were assembled across the globe, with Naperville civilians participating in one of their own with aspects specific to Naperville.

While the climate strikes aim to spread awareness and urge politicians to take action, most attendees have their own reasons for striking. Protestors ranged from teens to the elderly.

Pastor Tyler Spellious said he came to the protest because he can see that “God created this earth and we are destroying it”.

College of DuPage professor Dr. Vince Gaddis spoke at the strike and is fighting for The Green New Deal.

“I’m striking because we collectively have the power to change the world,” Gaddis said to the crowd.

The Green New Deal website says the bill “will convert the old, gray economy into a new, sustainable economy that is environmentally sound, economically viable and socially responsible. It seeks to solve the climate crisis by combining quick action to get to net-zero greenhouse gas emissions and 100% renewable energy by 2030 along with an ‘Economic Bill of Rights’ – the right to single-payer healthcare, a guaranteed job at a living wage, affordable housing and free college education.”

The plan, brought forth by legislative representatives Rep. Alexandria Ocasio-Cortez and Sen. Ed Markey, suggests nearly outright eliminating coal and oil companies, without causing mass disruption to the economy in the form of lost jobs and entire industries brought to the ground.

The protests like these are unique in that they call for immediate action and have appealed to a very large demographic.

Long-time climate activist and engineer Jeff Gahris attended the strike in hopes of capturing the attention of younger generations and getting them involved with the climate crisis.

“America used to be a world leader, and we need to recapture who we are as a country,” Gahris said. “We’ve been sort of stuck in neutral [in the United States], and we need to change our values.”

The community is uncertain how these protests will sway politicians, but spreading information is proving to stir up action and bring the issue of climate change to the front and center of the stage.