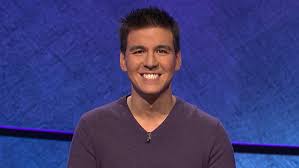 "Study harder than you think you should, and don't let anyone tell you what your limits are," Naperville North alumnus James Holzhauer told Central Times.

James Holzhauer was a preschool math prodigy, took advanced math and science classes and skipped a grade during his time at Naperville North. The 2001 graduate currently holds the second-longest winning streak in “Jeopardy!” play history. He broke his tie with Julia Collins, who won 20 games in 2014, on April 25 making $1,608,627.

“I would characterize my high school time as awkward,” Holzhauer said. “I was often three years younger than my classmates. I didn’t know that pro sports gamblers existed when I was 13, but I did tell my dad at that age that I wished there were a stock market for sports teams, so I could trade them for a living to combine my passions in sports and math.”

Holzhauer was on the Worldwide Youth in Science and Engineering state competition in high school and place first in physics and second in math. He was also on the Junior Engineering Technical Society and scholastic bowl. His passions were in math and science.

He then attended the  University of Illinois at Urbana-Champaign and got his degree in mathematics.

Holzhauer is now a Las Vegas professional sports gambler and he broke the single-game record on April 9 with $110,914. This amount reflects his daughters birthday who was born on Nov. 9th, 2014.

Holzhauer’s bets often  represent important personal dates in his life, be it his wedding anniversary, birthdays for his dad or even his  nephew as well.

In order to prepare for shows, he reads children’s shows and watches back-to-back reruns of “Jeopardy” on T.V. for hours at a time. He has also competed on “The Chase” and ABC”s “500 Questions.”

“I felt like I needed to simulate the actual conditions of each game show as closely as possible,” Holzhauer said. “So I wore dress shoes and actually shouted out answers while watching episodes, and practiced clicking a makeshift buzzer for Jeopardy. I think of my Jeopardy strategy as strategically aggressive, and I looked for any advantages I could have over the average player, just like I do in gambling.”

“His quickness,” Petersen said. “In both thinking through a problem and looking at something. I mean look how fast comes up with these answers.”

Holzhauer’s shares his inspiration in his games.

“My biggest inspiration now, as always, is my family,” Holzhauer said. “Anyone who’s familiar with my wagering numerology can see this.”

He gives budding gambling students advice for the future.

“My advice to potential contestants: study harder than you think you should, practice timing the buzzer, and don’t let anyone else tell you what your limits are,” Holzhauer said.