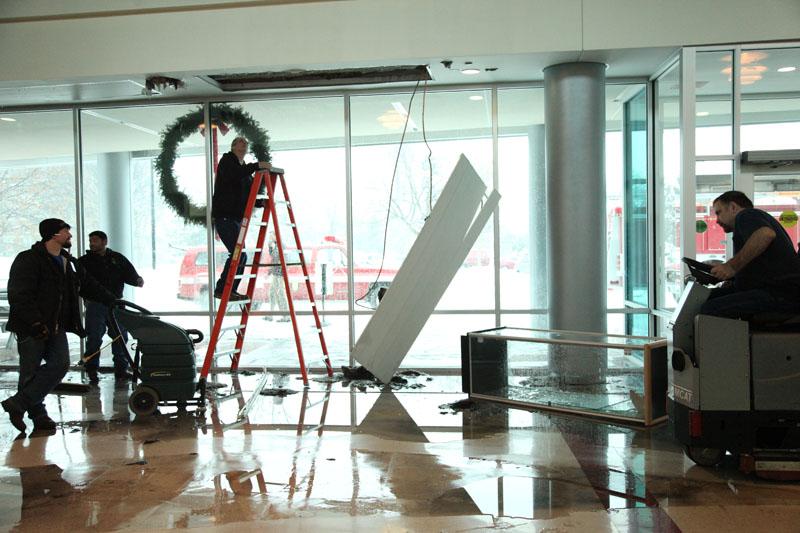 Central janitors respond to the burst pipe at the main entrance of the building caused by the extremely low Naperville temperatures.

Severely cold temperatures caused a water pipe near the front entrance of Central to burst. According to Steve Mathis, director of buildings and grounds for District 203, the fire alarm automatically set off when the sprinkler let loose at approximately 1 p.m. on Thursday.

Students were outside the building for about five minutes before returning to their sixth period classes. Immediately after the incident, maintenance and custodial staff began to remove water from the area surrounding the main entrance by Door 1.

Principal Bill Wiesbrook said he was “very happy” with how the maintenance crew, custodial staff and Naperville Fire Department responded so quickly.

“Water was gushing out of the ceiling when I first saw it, and [an hour later], I look at it and see how well [the maintenance staff and fire department] responded,” Wiesbrook said. “I’m also so happy with everybody who cooperated even though it was 15 degrees [outside] and you don’t know why the fire alarm went off.”

Due to the quick response this afternoon, almost all the water near the main entrance was removed by about 2 p.m. Though the burst pipe is inconvenient, Wiesbrook notes that the damage could have been much greater if the incident occurred at night or over the weekend.

Mathis says that the burst pipe was unpredictable, as a variety of factors contributed to the incident.

According to Mathis, extra precautions will be taken to insulate the ceiling by the main entrance. For now, remaining steps to repair the damage include removing the dry wall, replacing the sprinkler line, reinstalling the dry line and then insulating the ceiling with better material.

“We are going to have to replace the ceiling because it’s all dry wall up there and that’s where the water would have went into,” Mathis said. “We have to prevent any possible mold growth and be proactive and remove it all instead of trying to dry it.”

Mathis estimates that it will take approximately a week to repair the damage from the pipe leak. As the damage is repaired, visitors to Central may need to enter the building through door 8, the patio entrance facing Memorial Stadium.