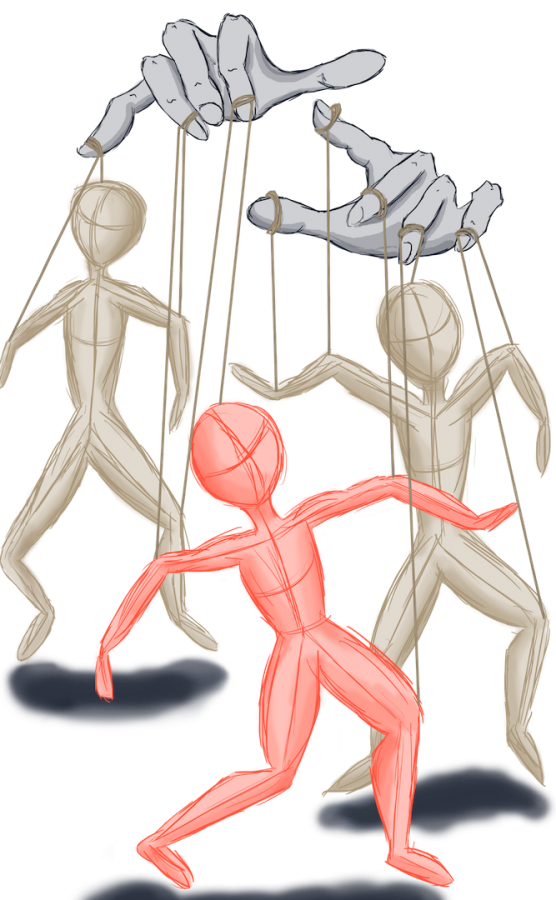 Senior Brian Jordan had a set summer schedule — he woke up, dropped his mother off at the train station and had until 4 p.m., the time he picked her up, to do whatever he wanted.

Jordan’s parents believed that he was working on college application essays. In fact, he was doing the exact opposite.

“They expect me to sit and study almost the entire day, and I don’t do that at all,” Jordan said. “I just chill at home, watch TV or something, and then maybe go out and hang out with my friends and then come back before 4 [p.m.] … I spend the evening studying or appearing to be studying.”

The Central Times has made an editorial decision to change Jordan’s name because he ignored our requests to contact his parents for a response.

In a new era filled with constant connection through various forms of technology, parents are now able to have full access to what their child is doing every second of the day.

This has a major effect on the way people choose to parent their children. Recently, a different form of parenting is making its way into the lives of students around the globe — helicopter parenting.

“[Helicopter parents are] parents who are constantly trying to figure out what’s going on in their children’s lives,” geriatric psychiatrist Dr. Nalla Banu Durai said.

This parenting style is fairly new. While there have always been heavily involved parents, they haven’t been coined with a name and an actual credited parenting style until the late ‘90s.

Helicopter parents appear at their children’s sides in any time of distress, which can later lead to full dependence as the children start to age.

Helicopter parents start to make their presence known in the early years of preschool. It can start with consecutive attendance at regulated school events and can even continue into coaching their kids’ sports teams.

With today’s technology, the methods of helicopter parents have gotten more intense.

“It depends on the degree to which you try to learn what’s going on in your children’s life,” Durai said. “[Helicopter parents can] put GPS trackers in [their] children’s phone, and they [say] ‘call me once you reach your friend’s house, call me once you get there.’”

Helicopter parenting during adolescence is known to cause kids to miss major milestones essential for developing into an independent and fully functioning adult. Parents fear their children’s hurt and failure, so they try their best to prevent it.

Parents can restrict their children’s independence in many ways, like not allowing them to cross the street alone or go to the movies without supervision. This results in children who don’t know how to be independent.

“Helicopter parenting [becomes harmful] if the child feels like it is too much,” Durai said. “Sometimes there might be unrealistic expectations on [both sides]. Some kids do not want to be told anything, some kids expect a little bit more guidance.”

Even though helicopter parenting is prevalent through the preschool to middle school years, it isn’t until high school when the effects start to show. Contrary to their earlier years of dependence, teenagers are expected to take on more responsibility and be fully capable of performing basic independent tasks.

It isn’t surprising that helicopter parents shine brighter than ever during the teenage years, as these are the most risky and determining years of childhood.

With more exposure to risky behavior and college just a few short years away, parents try to do everything to control their child, which includes steering them away from experiences the parents disapprove of.

However, the real difficulty of having helicopter parents comes in college when students kids must fully be independent. If the child of a helicopter parent displays one sign of normal stress in college, it is not unusual to witness a parent show up on the campus in a matter of a day. Even if they do not visit, it is hard for the parent to leave the child alone, especially if they are paying tuition.

Without the continuous dependence they are used to, students tend to start displaying mental health issues. In 2013, the American College Health Association conducted a nationwide survey of 100,000 college students who had helicopter parents. Their research showed that 60.5 percent felt very sad and 57 percent felt very lonely — more than half of the kids.

Jordan understands this because he spent his summer trying to evade his parents, whom he believes are helicopter parents.

“[My parents] are very strict about how much I can go out,” Jordan said. “Usually, I can’t go out on school days, and most weekends either unless it’s school-related. It’s very hard to get out of the house late, like 8 [p.m.]”

The common helicopter parent typically tries to strive for perfection through their children’s school work in order for them to achieve admission into a top university.

Since the parent cannot personally control their child’s grades, they do everything in their power to help them achieve the best scores.

Most common behaviors are completing homework assignments, typing up college applications, finishing essays and calling up teachers when the child is upset with a grade. These behaviors can instill a serious lack of work ethic and result in dependence on mom or dad to help complete the normal tasks of everyday teenage life.

Jordan’s parents did something different.

“My parents wanted me to start working on the Common App […] right away,” Jordan said. “They made me stop playing tennis, which I’ve been playing since I was in fourth grade, just to focus on [college applications] even though I really wanted to keep playing over the summer. Right now is when I’m getting my membership back so I can start playing again.”

When students  move on to higher education, whether it be a bachelor’s degree or an associate degree, many experience being alone for the first time.

In this time period, children tend to move out of the house, having their first taste of absolute independence. It is at this point where the effects of helicopter parenting hit rock bottom. This is the first time in the parents’ lives where they don’t have full control over their child’s actions and the first time where, in times of struggle and stress, children can’t turn to their parents for support.

If kids are failing to become independent, it is not just the parent who is the source of the issue. Helicopter parenting is a two-way street — the parents need control, and the kids need someone to depend on.

Chris Meno, a psychologist at Indiana University, offers advice to college-aged students on how to cope with their helicopter parenting past.

“Catch yourself when you are about to call home, and ask yourself if there is any way that you could figure the problem out on your own, or if you are calling four times a day, try to get it down to one,” Meno writes in an article.

Parents can also solicit advice from the community.

Liz Webb Peterman, principal of Spring Avenue Elementary School in La Grange, Ill., works to empower parents in order to strengthen the community in a non-judgemental environment in accordance with ParentsMatterToo’s goal, as she is a program coordinator for the organization.

ParentsMatterToo is an initiative of the Kids Matter youth organization located in Naperville.

“I think technology has been a good thing and a bad thing, because parents feel like ‘Okay, now I need to know their every move and they owe it to me,’” Webb Peterman said.

While it is easy to get caught up tracking one’s child on social media, Webb Peterman advises parents to back off and communicate with their child instead.

“[It’s important to talk] with your kids and build up that feeling [so] they have to own [up to responsibility],”  Webb Peterman said.